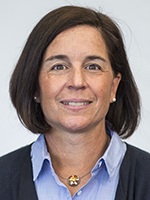 DeLorenzo enters her 20th season in 2020-21 as the head coach of the Panther field hockey program. She came to Middlebury after serving as the head field hockey and lacrosse coach at Skidmore for the previous six seasons.

DeLorenzo graduated from Goucher College in 1990, where she was an All-American field hockey and lacrosse player as well as a swimmer. She was inducted into the school's Hall of Fame in the spring of 2013.

Following graduation, she attended Indiana State University where she earned her master's degree in athletic administration in 1992. While at Indiana State, she began her coaching career with a two-year stint as an assistant field hockey coach for DePauw University in Greencastle, Indiana. In 1991, the Tigers advanced to the NCAA Tournament. After receiving her master's degree, DeLorenzo took a position at Oberlin College in Ohio as the head field hockey and lacrosse coach in the fall of 1992, becoming an assistant athletic director during her third and final year.

DeLorenzo began working at Skidmore College in the fall of 1995 as the head field hockey and lacrosse coach. She led the field hockey team to NCAA Tournament appearances in 1998 and 1999 and was named the UCAA (Upstate Collegiate Athletic Association) Coach of the Year in both of those seasons. She earned a six-year record of 69-37 at Skidmore, including a school record of 18 wins in 1999 when she was named the NFCAA Regional Coach of the Year. That season, her team also captured the UCAA Championship.

She is an active member of several field hockey national committees, including stints with several rules committees, such as currently serving on the Intercollegiate Women's Lacrosse Coaches Association (IWLCA) National Rules Committee. DeLorenzo directs clinics on Middlebury's campus throughout the year. She is also the director of two Nike field hockey camps as well as being involved with the United States Field Hockey Association (USFHA) Futures Program