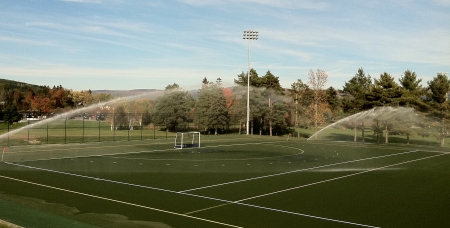 Opened in the spring of '00, the Kohn Field provides Middlebury a first class artificial surface. The field was named in honor of the late Peter Kohn, a friend of Middlebury College since he arrived on campus in 1980.

The 240' X 360' all-weather surface affords teams use of an outdoor facility during inclement weather and during the early spring when the ground may be snow covered. The field is home to the field hockey team, women's lacrosse squad and the men's lacrosse team until Alumni Stadium is playable. The surface is also shared by several Middlebury teams, as well as for intramural activities.

Peter Kohn was one of the most beloved and unique figures in the lacrosse world. For more than 50 years he was connected to the sport. The subject of a much-publicized documentary, “Keeper Of The Kohn,” he started as a field manager for the Park School in Baltimore in 1954. He was manager of the U.S. teams from 1978 to 1998, for the North-South All-Star game for over 25 years and for club teams in the United States Club Lacrosse Association for over 20 years. Kohn worked in the equipment room at Middlebury from 1981-1988, while serving as a manager of the men’s lacrosse team. He later began to spend his winters in Florida and returned to campus each spring to work with the team. When time permitted, Kohn also enjoyed helping out with other spring teams at Middlebury as well as teams during his brief visits in the fall and winter. Kohn is well-known throughout the lacrosse world, having served as manager of the U.S. National Team several times at the World Games.

Kohn left an indelible impression upon those he met and inspired. He became known for his generous spirit and tireless loyalty and demonstrated a passion for lacrosse that touched generations of players.